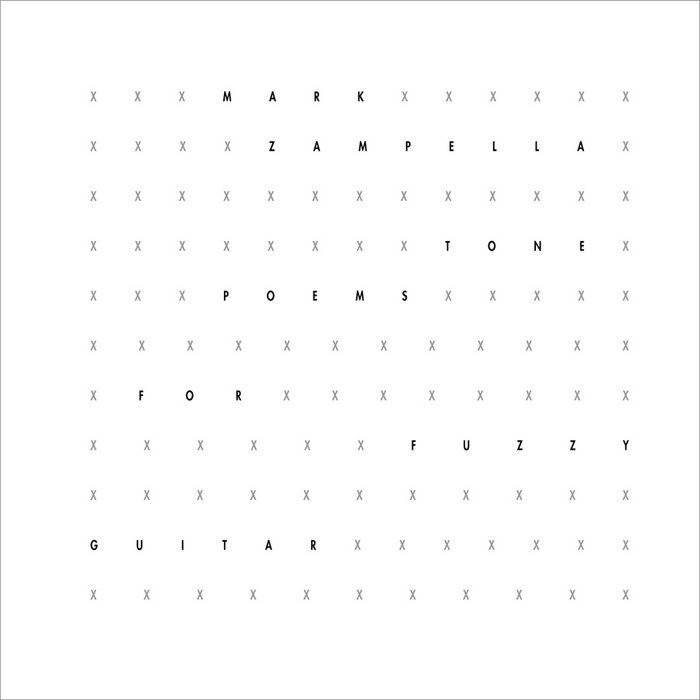 a tone poem is a piece of orchestral music in which the content of a poem, a story or novel, a painting, a landscape, or another non-musical source is illustrated or evoked.

these pieces are more poem than song. they don’t follow a strict song format, such as verse/chorus/verse, etc. they are more like stream of consciousness rants that dance around a melodic center, never fully committing to anything as structured as a chord progression or melody. sounds come in and out of focus, begging the listener to follow a developing melodic line, only to disappear around a corner, or devolve into reverb-drenched mayhem.

most of the sounds on this album were generated by an electric guitar. occasionally a drum loop, vocal sample, or synth line will pop up (tracks 6 and 8). lyndon johnson appears toward the end of track 5. he has been edited for clarity.

Mark Zampella says the distorted guitar sounds on his first solo release are layered, “like a sonic lasagna.” That alone conveys some of the sense of play at work on Tone Poems for Fuzzy Guitar, a collection of improvised, looped guitar works. Zampella keeps his experiments fresh track to track. The round-and-round, sequencer-like buzz of “Hive” is markedly different than the sustained, droning notes he eases out in “Funnel Cloud,” which in turn is nothing like very cool “Undertow,” my favorite track here. Zampella shows a lot of depth on this easy groove. It’s got a laid-back feel with touches of post-rock construction at the edges and a near-glitch rhythm. There’s a sexy little bass run in the middle (picking up the lead of a loop of scale-practice guitar), and the whole thing is shot through with a warbling, prayer-call-like vocal sample that gives it an exotic taste. Another favorite is the trippy “Kneel.” I can’t help but feel there’s a bit of a political statement hiding under the feedback-spiked wails here. Zampella tucks creatively spliced sound bites from some pol’s speech into the background, stitching together a bit of randomized, nonsensical dogma, interspersed with short blasts of applause. It’s effective, and delightfully weird.

Zampella gives a nod to Frippertonics in notes for the CD, and it certainly owes that debt of gratitude and inspiration. The constantly building layers and increasing depths of sound are rooted there, allowing Zampella to then add his own style and flair. The result is a very good solo debut and the arrival of an interesting and promising voice in ambient.

Mark Zampella is a filmmaker and multi-instrumentalist living in Sarasota, Florida. When he's not looping guitars for hours on end, he can be found playing with Immersion Project or Resolution.

Bandcamp Daily  your guide to the world of Bandcamp

Featured sounds by K.Spark and WIZDUMB, plus Basi joins the show to discuss his latest release.